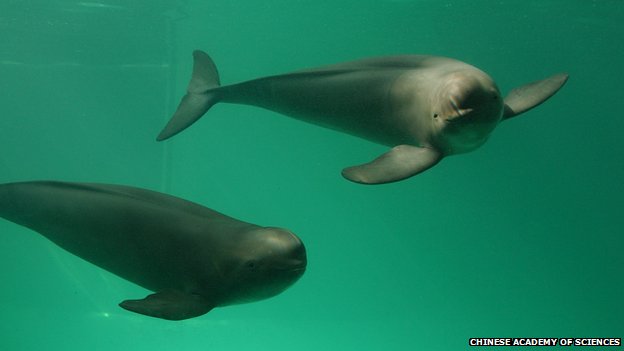 The mammals have suffered a dramatic decline and are now threatened with extinction.

Researchers carried out a survey to the establish how the animals are distributed in the Yangtze river.

They found current protected sections of the Yangtze do not cover all the areas where most porpoises were found.

Details of the findings are published in the journal Animal Conservation.

Another freshwater cetacean, the Yangtze river dolphin or "baiji" (Lipotes vexillifer) may already be extinct, and researchers are concerned the Yangtze finless porpoise (Neophocaena asiaeorientalis asiaeorientalis) could be the next to disappear.

Since the 1990s, a number of cetacean reserves have been established in the Yangtze, where riverside factory and water construction projects are restricted.

However some of these reserves were used to try to save the baiji and may not be suitable for porpoises.

"Ideally, the limited resources should have been used in areas where they are most needed," said research team member Dr Xiujiang Zhao from the Chinese Academy of Sciences, Wuhan.

"We make proposals that some river sections should be designated as new protected areas, given their high porpoise density."

Urgent conservation action is needed to save the porpoise from extinction "in the very near future", agrees Dr Samuel Turvey, from the Zoological Society of London, UK.

The plight of the Yangtze finless porpoise has been known for some time, but the current study details exactly how they are distributed in the river and suggests how they can be better protected.

The team identified five "hotspot" sections that contained the highest concentrations of porpoises.

They suggest the current reserve network, which covers 501km of the Yangtze river habitat, should be extended to cover all these areas.

The report is based on a porpoise population survey carried out in 2006.

Researchers used both visual and acoustic observations to measure the porpoises' "encounter rate", or the number of porpoises that could be observed within a specific distance.

They found the subspecies was very unevenly distributed in the upper, middle and lower reaches of the Yangtze main stem.

Two-thirds of the porpoise population were concentrated within a third of the river's surveyed area, while a 150km stretch between Shishou and Yueyang contained few or no porpoises.

In 2012, researchers counted direct sightings of the porpoises and concluded that the animals had declined further.

The exact reasons for the animals' dramatic decline over the last three decades remain unclear since the porpoises meet a number of threats along the busy Yangtze river.

"It's almost like a motorway rather than a standard river system," said Dr Turvey.

Many dead porpoises with wounds caused by boat propellers have been spotted by fishermen.

The scientists say they are presenting their conservation proposals to Chinese authorities such as the Ministry of Agriculture.

But they acknowledge that resources are limited and enforcing wildlife protection laws on the Yangtze is difficult due to illegal practices - such as electro fishing - which continue to occur.

According to the report, the proposals are "the first step" towards reversing the decline of the porpoises, but new protected areas "will not work without vigorous enforcement".